The Group - Scouting in Harrow since 1921

Welcome to the 8th/19th Harrow Scout Group, bringing Scouting to the children of West Harrow and Harrow Weald for over 95 years.

Our team of over 14 volunteer leaders helps us run a really enthusiastic and active group and organise an exciting programme of weekly activites and one-off events for over 100 kids.

Our groups meet at the following times and places each week: 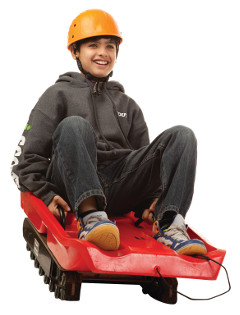 Scouting offers fun, challenge and everyday adventure to 400,000 girls and boys across the UK. Offering over 200 different activities from abseiling and archery to drama, street sports and water zorbing, Scouting helps 6-25 year olds grow in confidence, achieve their full potential and become active members of their communities.

Scouting's 500,000 members are an inspiration. It's great to see it. It's all about friendship and fun and adventure – people who might not normally have the chance for adventure. Scouts are shining lights in their communities.

This is only possible through the efforts of 100,000 volunteers who also enjoy the fun and friendship of Scouting. Trusted by nearly a million parents each week, the movement welcomes members from all backgrounds, faiths and cultures. Special emphasis is placed on bringing the Scouting programme to young people who currently do not benefit, particularly those in inner cities, those in rural areas and other disadvantaged groups. The Scout Association is a registered charity in the UK and part of a worldwide movement of 31 million Scouts working for peace and global friendship.

Parents tell us that Scouting gives their children more confidence, responsibility, a broader set of friends, a chance to pursue things they might not get to do otherwise, adventure and an extended family.

Children learn social skills as well as practical ones. They have to remember things to bring the following week so they have to take a bit of responsibility for their own stuff!

The Group Executive Committee meets approximately three times a year. It is the body that controls the functioning of the group – formalities, fund raising, events and development. It comprises a Chairperson, leaders from the five uniformed sections, a Treasurer, Secretary/Recorder and parent representatives. 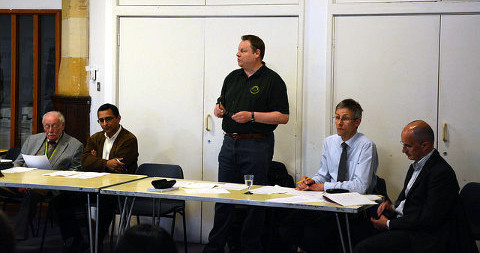 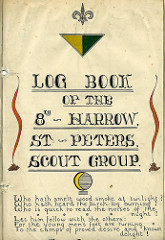 In the beginning was the lord and the lord was good. The lord in question was Lord Robert Baden-Powell, a man steeped in fieldcraft and survival skills from an early age. A famous soldier during the Boer War, B-P’s ideas and leadership skills led to the setting up of the Boy Scout Association following on from a hugely successful first scout camp held on Brownsea Island in Poole harbour in 1907. It was from this tiny acorn that worldwide scouting grew into the world’s biggest youth organisation with some 15 million members currently throughout the world.

Our Group began on 26th October 1921 with the first scout troop meeting of the 8th Harrow held at St. Peter’s church hall. This is now part of the foundations of the current car park!

The troop grew rapidly and held its first camp, a weekend on the fields at the bottom of Butler Road, now West Harrow Park! Between 1921 and 1938, the troop thrived, holding many camps and visiting international jamborees led mostly by parish priests and young men home grown from within the ranks. At some point in the early 1930s, a Wolf cub pack (as cub scouts were then known) was started and this has run continuously to the present day. 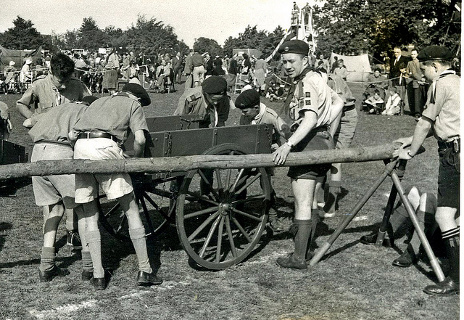 With the advent of the Second World War, the group went into a limbo period as its younger scouters joined up or were called up and our young scouts were evacuated despite becoming well known in Harrow for collecting scrap and bottles for the war effort. Who knows how many of Harrow’s railings ended up as bayonets? According to the scriptures of Jimmy Perry and David Croft, we do know that they didn’t like it up 'em!

After the war, the group was guided by Len Boni Stone for many years, firstly as scoutmaster and then Group Scout master. Other names worthy of note during this period (late 40s and 50s) were John Leakey, the Moore brothers Sid and Tom, the Lansley brothers Derek and Robin, Freddie Buckland, Brian Roscoe, Tony Hughes and Tony Wharton. These were the bedrock of the group and along with firstly Rover Scouts, Senior Scouts and Venture Scouts laid and maintained the foundations of the group as it is today. Several others, notably Brian Lake, moved out of the borough and assisted groups in other districts and counties. Yes, even in those days, one couldn’t afford to live in Harrow!

In the 1970s and 1980s the group thrived with many home grown scouters to lead the sections. Came the 1990s and a different set of problems arose with the closure of St Peter's an a general drop off in interest in Scouting led to our numbers dwindling. We continued to meet on the same site but with a very uncertain future. Eventually, St Peter's was assimilated into Christchurch, Roxeth and subsequently reopened as a parish community centre. Christchurch, Roxeth had its own scout group attached, the 10th Roxeth (formerly the 12th Harrow) and shortly after the two groups amalgamated becoming the 8th/12th Harrow. Shortly after this, our scout troop formed an alliance with the 19th Harrow, sharing headquarters and leaders to cut costs and to increase the level and standards of scouting offered. 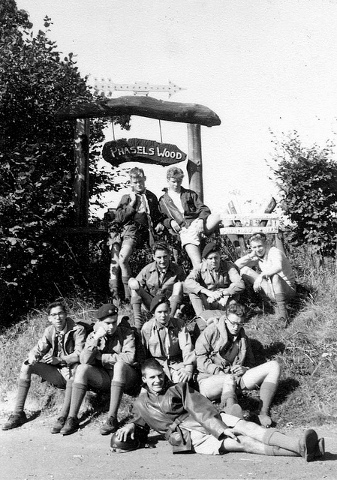 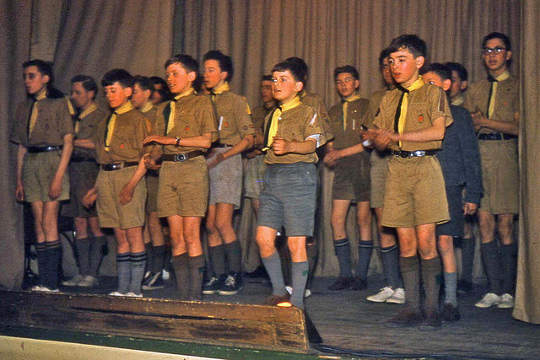 Coming right up to date (2016), the has just completed a formal amalgamation with the 19th Harrow and has recently re-registered itself as the 8th/19th Harrow Scout Group. It now has over a hundred members amongst its two Beaver colonies, two Cub Scout packs and a combined Scout Troop.

With a thriving Beaver colony underpinning its Cub Scout pack which in turn regularly feeds into the Scout Troop, our future is looking bright ahead. However, if there is a lesson to be learned over the years, it is not to take things for granted and become complacent. Many people, too numerous to mention, have contributed time and effort to build us to the position that we're in today. 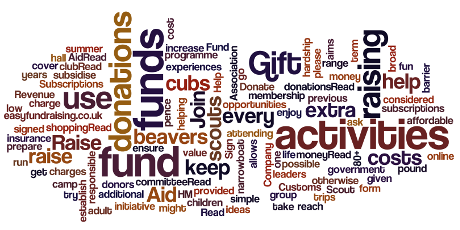 Help us to raise funds 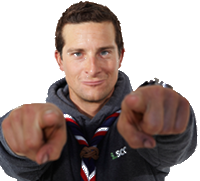 Inspire a generation of young people

There are many ways of volunteering
Read more »

A selection of images from our past. Click on an image to view the whole album of pictures, or view all our albums on Flickr.

Volunteering for Scouting is one of the most fun, rewarding and positive things you can ever do. You can give as much or a little time you like and we will match opportunities that fit your skills and time available. If you would like to have fun and make friends, earn professional qualifications and make a real difference to the lives of young people please contact us or click here for more details.